March 2014 – With the help of a newly founded pathology laboratory, clinicians in Lilongwe, Malawi found cervical lymphadenopathy to be associated more with malignancy and less with tuberculosis than a previous study and recommend biopsy or FNA during early treatment. 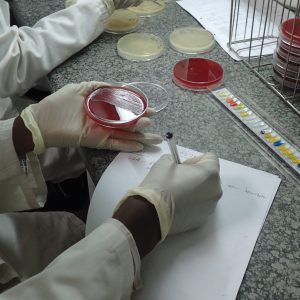 Introduction
The evaluation of cervical lymphadenopathy is a common diagnostic challenge facing clinicians. Previously at Kamuzu Central Hospital (KCH) tuberculosis (TB) was reported to be the most common cause of cervical lymphadenopathy However, no recent study has assessed this common diagnostic challenge in Malawi, particularly since the beginning of the HIV epidemic and the subsequent scale-up of antiretroviral therapy.

Methods
We conducted a cross-sectional study of all cervical lymph node specimens from the KCH pathology laboratory between 1 July 2011 and 28 February 2013 and describe patient age, gender, and pathologic diagnoses.

Results
Our search of the KCH pathology database yielded 179 cases. Of these, 143 (77%) were histologic specimens (open biopsy or core needle samples) while 34 (23%) were cytology specimens. The age range was from 0 to 76 years with a mean of 30 (SD: 19). In adults, the most common diagnosis was malignancy (n=41, 35%), while in children 15 cases each of malignancy and benign masses were diagnosed. Only 6 cases (5%) of TB were diagnosed in adults, and 4 cases (6%) of TB were diagnosed in children.