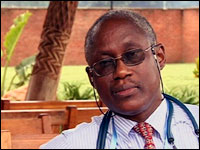 Our dear friend, Dr. Peter Kazembe, a Malawian colleague, pediatrician and adjunct professor of medicine with the University of North Carolina’s Institute for Global Health and Infection Diseases, died on August 11, 2020 at the age of 65 while receiving treatment for cancer in South Africa. He is survived by his wife, Hilda, and three grown children: Tiyanjana, Mwayi and Chesiyao.

Kazembe was one of the first two pediatricians in Malawi. He graduated with an MDChB degree from the University of Manchester and was admitted as a member of the Royal College of Physicians of the United Kingdom. He did his residency training in pediatrics at Toronto Hospital for Sick Children. In the words of his pediatrician colleague Dr. Charles Mwansambo, now Malawi Principal Secretary of Health, “At a time when most Malawian doctors studying abroad, especially specialists, were opting to stay abroad and make money for themselves, Peter returned home to serve and save the lives of children and of his own countrymen. He was a great man.” For decades, Kazembe and Mwansambo were the only two pediatricians serving all of Malawi.

Kazembe joined the clinical faculty of Kamuzu Central Hospital in Lilongwe as the head of the busy Department of Pediatrics. Within a short period of time, through innovations in staffing, triage and algorithmic care, he and his team had reduced the in-patient mortality rate from 20 percent to 5 percent. During Kazembe’s long tenure in global public service, he served as head of the Malawi Institutional Review Board the Health Sciences Research Committee and hospital director of Kamuzu Central. As director of the Malawi Baylor Pediatric Center of Excellence, he championed aggressive early HIV testing and ART treatment for children, practices which saved tens of thousands of children’s lives in Malawi. His combination of current technical expertise mixed with a pragmatic approach to care made him a valued member of World Health Organization task forces focusing on pediatric malaria, TB, HIV, and Burkitt’s Lymphoma,  which led to most of the current global management guidelines followed today by millions of practitioners in the developing world.

Mina Hosseinipour, MD, MPH, professor of medicine at UNC and scientific director of UNC Project-Malawi, enjoyed her 20-year working relationship with Kazembe. “Dr. Kazembe was essentially the father of pediatrics in Malawi, our most respected and influential voice for pediatric health care in Malawi and beyond,” she says. “Words can’t really describe his many contributions to the health care system in Malawi, the training of medical students and registrars, and his research and clinical care. As a senior and influential figure in the academic and public policy sector in Malawi, Dr. Kazembe watched over and protected UNC’s establishment and long-term presence in Malawi.” 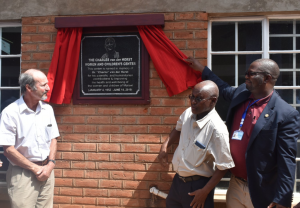 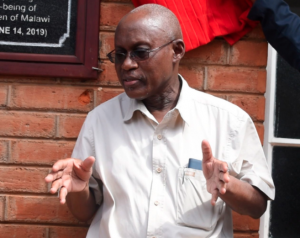 Irving Hoffman, PA, MPH professor of infectious diseases and international director of UNC Project-Malawi, agrees. “Although I am older than Peter, and always joked with him that I was his elder, he was like a father figure to me because of his calming wisdom. Like a good father, he was likely to help me solve my problems not with his opinion, but with a probing question that would always lead me to the heart of the solution. And Peter always helped me put ‘my problem’ in perspective with his half grin and smiling eyes and a mumbled side joke that told me every time to ‘chill out.’

“When I first arrived in Malawi almost 30 years ago on behalf of UNC, Peter was one of my first friends,” Hoffman remembers. “As the head of the Malawi IRB and also of the Central Hospital where we work, he was instrumental in allowing and encouraging UNC to become established as a research, training and care center in Lilongwe. UNC is forever grateful for his generosity and support during our long and rewarding professional relationship. In the end, I can only say I love Peter Kazembe, I will always remember him fondly as a brother and I will miss him every day.”

“In this life it might be possible to meet people who are quite simply the best of our species: kinder, gentler, smarter, wiser and more selfless,” says Institute Director Myron Cohen, MD. “Such people make the greatest contributions. Dr. Peter Kazembe was one of these rare people. He cared for thousands of sick children. He improved medical care in Malawi to serve an entire country. He was a lynchpin in too many important research projects to count.  And all of this was accomplished by a shy, quiet man with boundless energy and commitment to the people of Malawi. I can say without hesitation that Dr. Kazembe was one of the most remarkable people I ever met and is one of the people I most admire. He will be greatly missed.”

Kazembe served as a mentor and role model to scores of UNC faculty and students working in pediatrics or considering a global health career in Malawi. Among those mentees is Satish Gopal, MD, MPH, who lived in Malawi for seven years with UNC Project-Malawi and started the UNC Malawi Cancer Center. “As I was deciding what to do with my life in 2008, the two people who convinced me that Malawi would play a starring role in my future were Charlie van der Horst  [a former UNC professor of medicine who died in 2019 in a swimming accident] and Peter Kazembe,” Gopal says. “Charlie taught me that internationally recognized research could make a difference in individual people’s lives in Malawi, and Dr. Kazembe taught me that caring for individual people in Malawi with seriousness and humility could have international importance and impact. We’ve now lost both men over the last year, but the lessons I learned from Dr. Kazembe both in 2008 and subsequently as I tried to establish a global health career in Malawi will remain with me forever. I know I would not have survived one week in Lilongwe without having been able to seek his mentorship and wisdom often, and I’m grateful to be able to carry that wisdom with me now for the rest of my life.”

Lameck Chinula, MD, UNC assistant professor of obstetrics and gynecology and member of the UNC Project-Malawi leadership team, remembers, “When I completed medical training at College of Medicine in Blantyre and got posted to work at Kamuzu Central Hospital, Lilongwe, I got reaffirmation that I had indeed graduated as a medical doctor by the way Dr. Kazembe would always address you, “Dr Chinula, what do you think?” “Dr. Chinula, what other treatment options could you have considered?” Dr. Kazembe was the epitome of humanity, dedication and respect for others including junior colleagues. Even when he had a different opinion with others, he had a respectful way of expressing his contrary opinion. I take solace in the fact that I know that his duty to Malawi was accomplished, and I do pray that his soul rest in eternal peace.”

Tisu Mvalo, UNC assistant professor of pediatrics who worked closely with Dr. Kazembe on the hospital’s pediatric ward, remembers Kazembe uniquely as his own pediatrician and later as a mentor. “He was an exceptional pediatrician who excelled in clinical care of patients, training of clinicians, mentorship, research, global health and as a health program advisor locally and internationally. Aside from being a leader, he had an exceptional ability to work with people irrespective of cadre and a distinguished sense of humor. He first treated me as a child, then served as my supervisor, mentor, pediatrician for my children, and career development advisor. He will surely be missed!”

Kate Westmoreland, MD, a UNC assistant professor in pediatric oncology, was inspired by Kazembe to conduct research on Burkitt’s lymphoma in Malawi. “Dr. Kazembe pioneered pediatric Burkitt’s lymphoma treatment with cyclophosphamide monotherapy in the 1990s in Malawi and reported the first long-term survival, which laid the foundation for my research today that continues to optimize treatment strategies for pediatric Burkitt’s lymphoma in Malawi,” Westmoreland says. “Dr. Kazembe did not just do this for pediatric oncology, but he singlehandedly built the foundation across all pediatric specialties and wrote the handbook with treatment guidelines that has improved the medical care of all children in Malawi. He was a selfless, humble, and empathic leader and a true hero who saved the lives of millions of children in Malawi.”

Adds Elizabeth Fitzgerald, MD, a UNC assistant professor in pediatric emergency medicine who worked closely with Dr. Kazembe. “He was my hero. He was wise, kind, and humble despite all that he accomplished and all who revered him. I am profoundly grateful to have learned from him both personally and professionally and will miss his guidance and dry wit. His death leaves a hole in the lives and hearts of all who knew him.”

“He leaves with us an indelible legacy in the fight against Malaria, HIV and other diseases. UNC Project will forever remain highly indebted to the unlimited contributions he has made in various projects for the greater good of humanity,” Mofolo says. “Let’s emulate the hardworking spirit and dedication to country that Dr Kazembe embodied. Let’s continue to be each other’s keeper in respect of his legacy.”