Tick-borne diseases (TBD) including Spotted Fever Group Rickettsiosis (SFGR), ehrlichiosis, and increasingly Lyme disease, represent a substantial public health concern throughout much of the Southeastern United States. North Carolina experiences some of the highest rates of SFGR and ehrlichiosis in the United States, often accounting for more than of 10% and 5% of cases reported to the CDC, respectively. Yet timely and accurate surveillance is limited by both the nature of reporting and the limitations of existing diagnostic methods.

The cross-sectional study “Testing for tick-borne diseases and implications for surveillance in the Southeastern USA,” published in JAMA Network Open, highlights important issues in vector-borne disease at the intersection of public health, diagnostics and clinical practice. Research from the Institute for Global Health and Infectious Diseases, Gillings School of Global Public Health, UNC School of Medicine’s Department of Pathology and Laboratory Medicine, the Carolina Population Center and the NC Division of Public Health collaborated on the study.

Led by Amanda Brown Marusiak, MPH, a doctoral candidate in epidemiology, and Brandon Hollingsworth, PhD, a former post-doc, the team examined the incidence of TBD and patterns of both negative results and incomplete diagnostic testing at UNC Health, from January 1, 2017 to November 30, 2020. 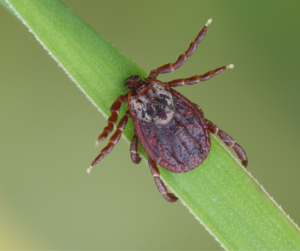 “We suspected low amounts of testing completion for rickettsioses and ehrlichiosis, which require two blood draws, and we wondered about testing volume for each pathogen, including Lyme,” said Marusiak, whose interest in quantitatively exploring tick-borne disease testing was based on the clinical experience of Ross Boyce, MD, associate professor in the division of infectious diseases, and assistant professor of epidemiology, Gillings School of Global Public Health.

“It’s exciting to be a part of Dr. Boyce’s effort to expand vector-borne disease research, which is paving the way to better understanding of tick-borne pathogens in North Carolina.”

During the four-year study period, 11,367 individuals were tested for TBD and among the 20,528 diagnostic tests performed, the team identified 47 laboratory-confirmed, incident cases of SFGR, 27 of ehrlichiosis, and 76 of Lyme, representing incidence rates of 4.7%, 7.1%, and 0.7% respectively. However, 79.3% of all SFGR tests and 74.3% of Ehrlichia tests lacked a paired convalescent sample. A crucial finding was the high rate of testing for Lyme disease in contrast to the relative neglect of testing for ehrlichiosis, even among those tested for SFGR. The low rate of testing completeness and lack of consideration of ehrlichiosis likely resulted in a large number of unidentified cases, which would greatly impact surveillance data. Furthermore, a majority of patients suspected of having TBD did not have testing performed in accordance with established guidelines, substantially limiting the understanding of TBD epidemiology.

“Anecdotally, we see that a lot of patients suspected of having tick-borne disease are tested for Lyme, which is not particularly common in central North Carolina, but are not tested for other, less well-known diseases like Ehrlichiosis, which is endemic to the region and may well be the most frequent cause of tick-borne disease here,” Boyce said.

“The lack of testing for Ehrlichiosis not only means that we are dramatically under-counting the number of cases in the state each year, but also that some patients may not get timely diagnosis and treatment. When treatment is delayed, Ehrlichiosis can progress to severe and even fatal disease.”

Despite increasing awareness of TBD as a growing public health threat, the study demonstrates that critical gaps remain in the routine surveillance systems underlying our knowledge of the spatial and clinical epidemiology of these diseases. Researchers acknowledge the findings underscore the need to pursue more robust, active surveillance strategies to estimate the burden of TBDs and distribution of causative pathogens.

Boyce adds that patients and providers should know that tick-borne disease and Lyme are not synonymous, especially in North Carolina. If anything, other pathogens like Rickettsia and Ehrlichia are much more common and testing should reflect that.