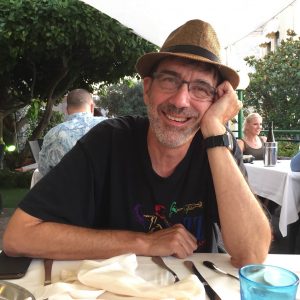 “There are few people like him,” as a long-term collaborator and friend said. “Steve was so humble and generous that I don’t think he really understood the impact he had on the people around him. He profoundly changed for the better the lives of so many people he worked with and trained, without ever asking anything for himself.”

Steven Richard Meshnick, MD, PhD, professor of epidemiology at the Gillings School of Global Public Health, died of cancer on August 5, 2020 at his home in Carrboro, N.C. He was surrounded by his wife, Dr. Mary McKinney, and four children, Maggie, Elijah, Leah and Laura.

For nearly two decades, Meshnick was an integral member of UNC’s Gillings School of Global Public Health and the Institute for Global Health and Infectious Diseases. In a career that spanned over 40 years, Meshnick conducted formative research around the mechanisms of action of antimalarial drugs and the epidemiology of multiple pathogens that disproportionately affect the health of people in tropical and subtropical regions. He published over 350 manuscripts in peer-reviewed journals. For his remarkable contributions to tropical medicine, he was inducted as a Fellow of the American Society of Tropical Medicine and Hygiene in 2017.

Although his work spanned the globe, including Kenya, Thailand, China, and Cambodia, Meshnick developed particularly strong bonds to The Democratic Republic of the Congo and Malawi.  The research, capacity building and training he conducted around malaria, HIV/AIDS and other infectious diseases in these countries will leave a lasting footprint and continue to improve the health of these regions for years to come.

“Steve taught me to be the academic scientist I am today,” says Jonathan Juliano, MD, professor of infectious diseases at UNC who was mentored by Meshnick. “He was an exceptional scientist who had an uncanny ability to hone in on what was most important and most impactful. The impact he had on the infectious diseases community here at UNC, nationally and internationally cannot be understated. Impressively, he did it in the most humble and generous way possible.”

“Steve was remarkable in every possible way,” says Myron Cohen, MD, director of the Institute for Global Health and Infectious Diseases. “He was always excited about science and new ideas. He inspired a generation of young investigators and built a world-class research team. He loved working with people from around the globe. He was a wonderful friend and colleague and he will be so sorely missed.”

Meshnick was intensely committed to training, having mentored 30 doctoral students and 8 postdoctoral fellows. In a recent tribute, his trainees remarked upon his candor, an innate sense of what they needed, and his passion for research. The Gillings School of Global Public Health honored Meshnick with the well-deserved 2020 John Larsh Award for Mentoring.

In the Department of Epidemiology, Meshnick led the infectious diseases program, served as associate chair and director of graduate studies. In these roles, he helped develop and lead initiatives for improving training in the department. His trainees have gone on to careers in academic medicine, at the Centers for Disease Control and Prevention, at the National Institutes of Health and at the World Health Organization. At UNC, the research group he started has evolved into a thriving group of investigators, the Infectious Disease Epidemiology and Ecology Lab (IDEEL).

“Steve had a knack for bringing people together,” says Jonathan Parr, MD, MPH, an IDEEL colleague. “Whether you were the newest trainee in the lab or a long-time colleague, he listened to your ideas and encouraged collaboration. He nurtured both good science and your growth as a person.”

Meshnick took particular pride in providing support and mentoring for foreign students and trainees, having worked with individuals from Malawi, the DRC, Thailand, and the Gambia. His trainees have gone on to make profound impacts in their own countries. In Malawi, through an NIH training grant, he was able to mentor multiple investigators who now serve as faculty members at institutions in Malawi. One trainee, Victor Mwapasa, PhD, MPH, established the first School of Public Health in Malawi under his mentor’s guidance.

“We started with 15 students a year and now we are close to 100 a year, and the key professors in this school were all trained by Professor Meshnick,” remembers Mwapasa. “He really built the capacity of Malawians in terms of public health and epidemiology. There is no sector in Malawi — in public, in academia, in government, in the private sector — that Steve Meshnick hasn’t actually influenced.” Steve performs one of his songs at an IDEEL lab meeting. He wrote a suite of songs inspired by epidemiology and the history of medicine. 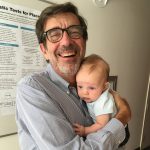 Steve welcomes a new member of the IDEEL family.

Meshnick’s impact on others was palpable on May 15, 2020, when more than 200 friends, colleagues and former students from around the world gathered online to honor their friend and mentor (watch a recording of this tribute). The celebration of Meshnick’s life highlighted his many roles as a leading scientist, dedicated father and husband, talented mentor, sought-after collaborator, gifted communicator, whimsical musician, and all-around man of integrity. After becoming ill, he continued to selflessly advise his trainees, meeting them for coffee, having them over to his home, or sharing a quick phone call. At the same time, he spent time with his family and composed his last album, Autobiography (available on Spotify and AppleMusic.)

Meshnick’s passion for music and family offered a healthy balance to his research and mentoring, as Barbara Rimer, dean of the Gillings School of Global Public Health, noted during the May 2020 online tribute. “Many of us were at a concert that Steve and his bandmates gave in Carrboro several months ago. It was an amazing event and captured Steve’s wit and wisdom, his love of family, epidemiology, and music, his dedication to students and colleagues, and his directness about his illness,” Rimer said. “Steve was a man of remarkably balanced interests, and I think that’s what made him so incredibly sane.”

To honor Steve’s life and work

In the latter half of his career, Meshnick worked from the ground up to build a lasting partnership with public health researchers in the DRC. He designated the funds from his Larsh mentoring award to support the doctoral studies of Kashamuka (Kash) Mwandagalirwa, a longtime colleague and key collaborator in the DRC, as a means of supporting the global projects to which he had dedicated his life. He asked that those wishing to honor his life and work contribute to a fund that will support training of researchers and public health efforts in the DRC. Online donations may be made at unchf.org/meshnickmemorial. Checks may be made payable to the UNC Health Foundation, with ‘Memorial gift in honor of Dr. Steven R. Meshnick’ on the memo line, may be mailed to the UNC Health Foundation, 123 W. Franklin St., Suite 510, Chapel Hill, N.C. 27516. For more information, write to Mary Margaret Carroll at the foundation.